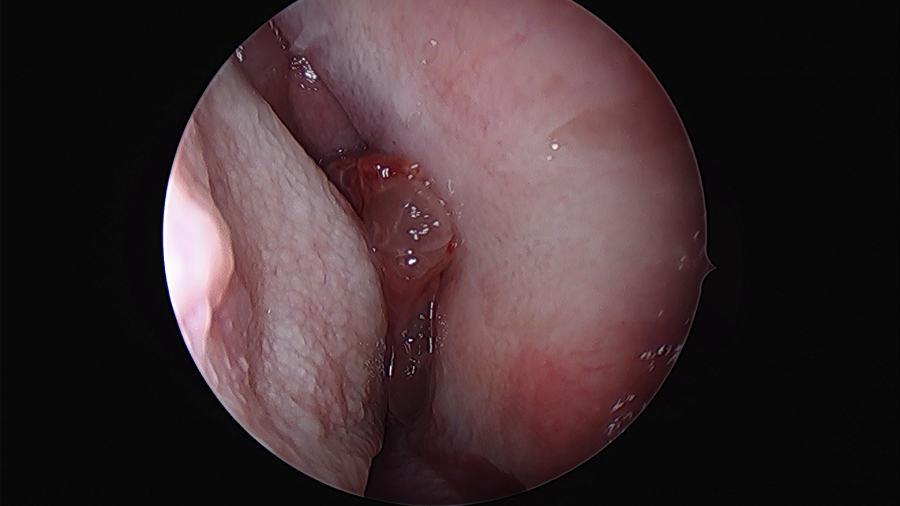 Inverted papilloma is a rare, benign but locally aggressive neoplasm that arises in the Schneiderian epithelium which lines the nasal cavity and paranasal sinuses.

It is also known as Ringertz tumor, Schneiderian papilloma, Cylindroma and Benign papilloma of the nasal cavity.

Inverted papilloma is the second most common benign tumor of the nose, after ossifying fibroma, and is the most common cause for a surgical indication of benign nasal tumors.

Papillomas arising from the Schneiderian membrane is very unique in that they behave like neoplasms, and are found to be growing inwardly – hence the term inverted papilloma.

The stimulus for this papilloma formation and proliferation is unknown. Human papillomavirus (HPV) has been implicated as a causative factor for this, though its exact role is controversial.  HPV serotypes 6, 11, 16 and 18 are found to be associated with sinonasal inverted papilloma. Based on the potential to turn malignant, HPV-6 and -11 are regarded as low-grade risk types, and HPV-16 and -18 are regarded as high-grade risk types. Coinfection with Herpes simplex virus (HSV) may also interact with Human papillomavirus to cause inverted papilloma.

Other suggested causes could be chronic inflammation, smoking, allergy and occupational exposure to welding, organic solvents, and noxious agents.

Immuno-histochemistry studies have shown that, Metalloproteinase 9 (MMP-9) enzyme involved in tissue remodeling events were significantly increased in the lamina propria adjacent to the hyperplastic epithelium in inverted papilloma. In another study, Hepatocyte Growth Factor (HGF) and its receptor, “c-Met”, were found to be increased in patients with inverted papilloma compared with controls, suggesting that they may be related to proliferation of inverted papilloma.

Molecular studies have identified down regulation of p53, p21 tumor suppressor genes in inverted papilloma with malignant transformation. Genetic testing for mutation of these genes may help in predicting maligant transformation of sinonasal papilloma.

Inverted papillomas account for approximately 0.5-5.0% of all sinonasal tumors with an annual incidence of 0.5 to 1.5 cases per 1 lakh population.

The disease is most frequently seen in white males, 40-60 years of age with a mean age of presentation 50 years.

There is a significant predilection for males (with a male:female ratio of approximately  3-5:1.

Most common symptoms of inverted papilloma are unilateral nasal obstruction associated with watery nasal discharge or nasal bleeding. Due to the location, impairment of normal drainage of the maxillary antrum is common, the patient will have clinical features of sinusitis also. Other symptoms are anosmia (loss of smell), epiphora (watering from eyes), numbness over the cheek, hyponasal speech, etc.

The patient may have orbital symptoms like proptosis if lamina papyracea is breached.

Clinical examination, usually by nasal endoscopy, will reveal a fleshy mass in the nasal cavity. Sometimes papilloma may occur behind a sentinel nasal polyp.

Commonly papilloma arises on the lateral wall of the nasal cavity, most frequently related to the middle turbinate and maxillary ostium, although they are seen elsewhere in the nasal passage. As the mass enlarges it results in bony remodeling and resorption and often extends into the maxillary antrum. Maxillary sinus is the second most common site after lateral nasal wall followed by other sinuses.

X-rays: Xrays of the nose and paranasal sinuses no longer has a significant role play in the assessment of sinonasal disease. If obtaining, the most common finding is that of a nasal mass with associated opacification of the adjacent maxillary antrum. A chest radiograph is obtained for patients with associated squamous cell carcinoma.

Computed tomography (CT) scan of nose and Paranasal sinuses with contrast medium: CT Scan features are largely non-specific, but it helps to assess the extent of the lesion and to stage the disease. CT demonstrates a soft tissue density mass with some post-contrast enhancement. As the mass enlarges bony resorption and destruction may be present, similar to those seen in patients with squamous cell carcinoma. Calcification is sometimes observed. The location of the mass is one of the few clues toward the correct diagnosis.

Magnetic Resonance Imaging (MRI): MRI of inverted papilloma has a characteristic appearance – streaky delineation with convoluted cerebriform patterns on both T2 and contrast-enhanced T1 weighted images. MRI is the imaging of choice in follow-up for post papilloma removed patients.

Biopsy and histopathological examination: Histopathologically nasal papillomas show three architectural patterns (WHO classification). Sometimes there may be a combination of these histological patterns.

Classification and Staging of Inverted papilloma

Treatment for inverted papilloma is primarily by surgical resection, which provides a cure in most of the cases. Aim of the surgery is the complete eradication of the disease in the first attempt itself. Remnants if any will cause recurrence of the lesion.

Surgical removal of the tumor can be done via a lateral rhinotomy approach, midfacial degloving approach, a subcranial approach or an endonasal endoscopic approach.

With the advent of the nasal endoscopes, other radical surgical approaches become obsolete. The first report on endoscopic treatment of inverted papilloma dates back to 1981, when Stammberger documented 15 patients treated by a purely endoscopic approach.

If the mass is huge then a combined approach with a lateral rhinotomy may be needed for complete removal. Endoscopic resection is contraindicated in inverted papilloma with massive skull base erosion, intradural extension, intra-orbital extension, abundant scar tissue from prior surgery, and/or associated squamous cell carcinoma.

Along with the removal of the tumor, it is mandatory to remove the periosteum also from which the tumor is arising in order to eliminate potential microscopic lesions that may be present in the bone. The operation should end with the creation of a largely marsupialized cavity which will give wide access during follow-up for periodic endoscopic inspection.

Inverted papilloma is notorious for recurrence even after complete surgical removal of the mass. In olden days reoccurrence rates were higher between 0-78 % because of incomplete removal. Now, recurrence rates are below 10%. Other than incomplete removal, cigarette smoking is found to be associated with higher rates of recurrence. The majority of patients who develop a local recurrence can be successfully salvaged with additional surgery.

Surgically unresectable masses and masses that have undergone malignant transformation should be subjected to irradiation. Radiotherapy techniques and dose fractionation schedules are essentially the same as those used for carcinomas of the nasal cavity and paranasal sinuses.

Inverted papilloma is associated with squamous cell carcinoma in approximately 5 percent of cases. Carcinomatous transformation is common in tumors arising in the lateral wall of the nasal cavity than those arising in the nasal septum.

Normally keratinization is rare in inverted papilloma. Excessive keratinization and a breach in the basement membrane should prompt the pathologist to have a diagnosis of malignant transformation.

Malignant transformation of inverted papilloma is found to have multiple histologies. Non-keratinising squamous cell carcinoma is the most common type, seen in approximately 11% of cases followed by the keratinizing type. Less frequently other malignant histologies including mucoepidermoid carcinoma, verrucous carcinoma, and adenocarcinoma seen.