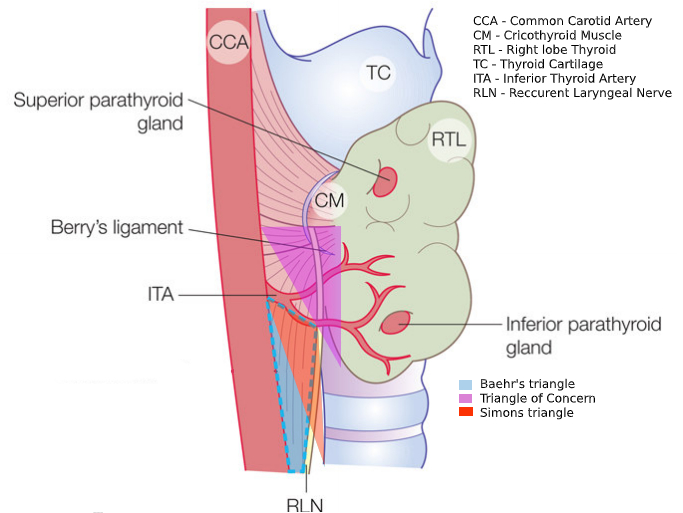 In this article we summarize these triangles in relation to thyroidectomy.

This is one of the most important triangle in relation with thyroid. This triangle is named after O H Beahrs. Its synonymous as Riddle’s triangle.

Baehr’s triangle is bounded by

The triangle lies posterior to the thyroid gland, in the tracheo-esophageal groove.

Boundaries of Baehr’s triangle can be identified after retracting the ipsilateral thyroid lobe medially to safe guard the recurrent laryngeal nerve.

Classically, the RLN is identified intraoperatively in Simon’s triangle, which  is formed by

The nerve  crosses the triangle.

This triangle described by Lore et al., is also for identification of recurrent laryngeal nerve.

This is an inverted triangle with

Joll’s triangle is concerned with identification and preservation of External branch of superior laryngeal nerve (EBSLN).

EBSLN lies in the floor of the triangle formed by the cricothyroid muscle. The triangle is also named as sternothyroid-laryngeal triangle.

Reeve’s space is an avascular space between the upper pole of the thyroid gland and the cricothyroid muscle. Identification and opening up of the space is important for preservation of EBSLN.

The space opens up once the medial dissection is performed at the superior pole of thyroid gland. The ipsilateral thyroid lobe is given traction in a downward and outward direction to open up the sternothyroid—laryngeal triangle or “Jolls triangle”

The commonest site for bleeding in thyroidectomy is the ‘triangle of concern’, comprising the