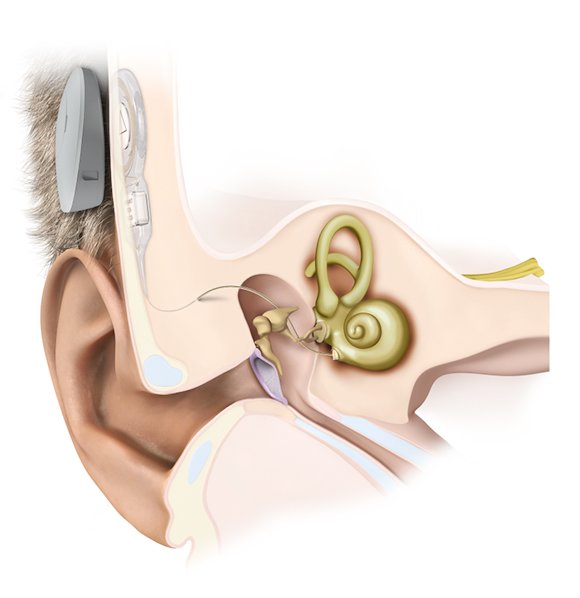 Middle ear hearing implants belongs to the group of Implantable Acoustics or Mechanical hearing devices which are used in rehabilitative management of patients with hearing loss, offering an alternative to conventional hearing aids.

Dr. Wilska in 1930, was the first to use the principle of electromagnetic induction to stimulate the middle ear. He placed iron particles over the eardrum (tympanic membrane) and stimulated them by an electromagnetic coil placed in the ear canal.

Unlike conventional hearing aids that are placed outside the ear, middle ear implants are partially or totally implanted through surgery into the body. These prosthetic devices will directly couple acoustic (sound) energy to ossicular chain or cochlea, providing a more natural, less distorted signal into the cochlea.

Conventional hearing aids receive sound energy via a microphone, process and amplify them, and transmits them via speaker kept near eardrum which then passes through the normal auditory pathway.

In Middle ear hearing implants, the microphone collects the sound waves, which is then converted into mechanical energy with the help of a transducer, and is then coupled directly to ossicles.

Actuator / Transducer design
Based on the current technologies in use, three basic types of transducers are used in the middle ear implants – Piezoelectric, electromagnetic, and electromechanical.

Partial and Total Implantable devices
Partially implanted devices use an external processor consisting of a microphone, a speech processor, battery and a transmitter coil that transmits signals and power to internal device transcutaneously. The advantage of being the replacement of batteries, services, upgrades of processors and minimizing the size of the internal device. But needs patient acceptance.

The total implantable device has all the portions implanted inside the body without anything externally. Though this is cosmetically better, it warrants surgical procedures at every 4-5 years for replacement of the battery.

A middle ear hearing implant does not restore normal hearing and the degree of hearing benefit varies with each individual. Variables influencing the benefits each person will derive include factors such as age, degree, and duration of hearing loss and integrity of the auditory system.

The audio processor of the latest generation middle ear hearing implants can be connected to external devices via Bluetooth or telecoil. This enables the signal from persons mobile phone, MP3 player, FM system or assistive listening device to be transmitted wirelessly to the audio processor with no loss of sound quality.

But these devices also have most of the same challenges as conventional aids. In addition, they need surgery for installation and for the replacement of batteries which makes them costlier. These surgical procedures are associated with complications like skin flap necrosis, incus necrosis, injury to facial nerve and damage to the chorda-tympani nerve.

Patients who are using an electromagnetic type implant are advised not to undergo MRI. There are some latest generation devices which are compatible up to 1.5 Tesla MRI.

Monoploar surgical instruments are not to be used in the vicinity of these implants and diathermy must never be applied over the implant.

Device electronics failure is a rare but major problem associated with middle ear implants. The reported incidence of this in literature is 5.7% of the patients.

Middle ear hearing implants are indicated for individuals who hear with conventional aids but are looking for improvements in sound quality, comfort, and cosmesis.

Studies have shown that only 0.09% of hearing-impaired individuals are currently considered to be good candidates for this.

The device is contraindicated for patients with an active middle ear infection, those who had previous middle ear surgery, otosclerosis, ossicular erosion, retrocochlear hearing loss, tinnitus, and skin diseases in the external ear canal.

In Europe, 3 companies are approved and certified by the NHS are actively present in the market: Med-EL, Otologics, and Envoy Medical Corporation. While in the US, the Vibrant Soundbridge (VSB) was the first and only FDA approved middle ear implant for patients with sensorineural hearing loss. We will be describing about these devices in detail below.

The vibrant sound bridge is a partially implantable middle ear hearing prosthesis which was invented by Geoff Ball in 1996 and received its FDA approval in 2000.

The implant unit consists of an external auditory processor with a microphone and an internal receiver which is placed in a bony trough in the retrosigmoid bone several centimeters behind the ear similar to the placement of cochlear implant processor.

The internal unit is called a Vibrating Ossicular Reconstruction Prosthesis (VORP) which is crimped to the long process of the incus via a facial recess / large posterior tympanotomy approach. VORP contains a receiver, conductor link and an electromagnetic floating mass transducer (FMT).

The sound picked up by the audio processor is processed, amplified and sent via radiofrequency signals to the VORP. The VORP receives these signals and transmits the information to the FMT, via an electromagnetic field, that directly vibrates the ossicular chain.

Instead of attaching to the incus, VORP can also be connected to stapes supra structure, round window or oval window. In such cases, the operation is termed as “Vibroplasty”.

Short term cohort studies have given favorable results for Vibrant SoundBridge with more than 10dB improvement at 2, 4 and 6kHz and quality of amplification adequate for speech discrimination.

A typical patient who uses his or her device for 12 to 16 hours a day may need to change the battery about once a week. In addition to the problems associated with the implantation surgery (described below), literature reports 0.3% failure rate, 5% incidence of revision surgery in Vibrant SoundBridge implantation.

Carina is an electromagnetic middle ear hearing aid which is coupled to the incus. The original semi implantable MET is now replaced by total implantable Carina with a subcutaneous microphone.

This uses an axial rod to exert a linear motion of incus as the actuator. This model can exert greater force on incus at the price of higher complexity and need for skillful installation.

Under GA with a limited mastoidectomy and atticotomy incus body and malleus head is exposed. Using laser, a small pit is made in the posterosuperior part of body of the incus and the linear actuator is placed there. A bone well is drilled superior and posterior to atticotomy for placing the internal unit and a mounting stage with a cranioplasty plate is attached to the mastoid bone with
screws. The microphone is positioned subperiosteal at an intact region of the mastoid cortex.

Studies have shown 10-20dB functional gains with the use of Carina.

Other than the common problems of a middle ear implant (mentioned above), being a fully total implantable device, Carina needs revision surgery at 5 years for battery replacement.

Esteem is a fully implantable piezoelectric device that is directly coupled to malleus and stapes heads.

Esteem uses the normal tympanic membrane and the malleus as the microphone diaphragm. Sound enters the outer ear and funnels down the ear canal causing your eardrum to vibrate. The first piezoelectric sensor which is attached to malleus senses malleus motions and converts into a signal voltage which is then amplified and used to drive a second piezoelectric actuator in contact with incus or stapes.

There are few limitations for Esteem hearing implant – as the implantation needs partial removal of incus it can cause conductive hearing loss in case of device failure, being a lithium-ion battery-powered, the device needs surgery for battery replacement at 5-7 years. Studies have reported a drop in performance due to the gradual ingress of moisture in transducers.