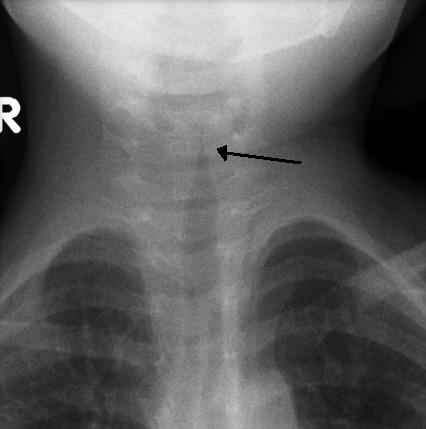 Subglottic stenosis is a clinical condition occurring due to the narrowing of the subglottic lumen of the larynx (voice box) at the region of the cricoid cartilage.

Based on the pathology, age at clinical presentation and the features, subglottic stenosis is of three types: congenital, acquired and idiopathic.

Subglottic stenosis is considered to be congenital in the absence of a history of endotracheal intubation, laryngeal trauma or other apparent causes of acquired stenosis. In a term newborn, the normal cutoff diameter of subglottis is 4.5 to 5.5mm while it is 3.5mm in a pre-term baby. Diameter less than 4 mm in a term baby and less than 3 mm in the preterm infant is considered diagnostic of subglottic stenosis.

Congenital subglottic stenosis is the third most common congenital disorder of larynx after laryngomalacia and recurrent laryngeal nerve palsy, and the most common laryngeal anomaly necessitating tracheostomy in children under 1 year of age.

The reason for congenital subglottic stenosis is possibly due to defective canalization of cricoid cartilage and/or conus elasticus, during gestation, resulting in a small, elliptical, thickened cricoid and/or excessive submucosal soft tissue. Alternatively, there may be an anterior fusion of vocal cords with subglottic extension as seen in Sphrintzen syndrome or DiGeorge syndrome (Velocardiofacial anomalies / 22q11)

The most common cause for acquired subglottic stenosis is translaryngeal intubation for prolonged intubation in intensive care units due to the need for mechanical ventilatory support. The inflated cuffs of endotracheal tube result in mucosal ischemia and ulceration, resulting in the formation of a firm fibrous scar on healing with varying degrees of stenosis.

Idiopathic subglottic stenosis occurs almost exclusively in white females near the 40-50s of age. Hence the pathology is considered to be a biologic process coinciding with the hormonal alterations observed in near menopause women (average age 50). Other cause for idiopathic subglottic stenosis, though not proved, includes genetic factors, a subtle manifestation of collagen vascular disease, an anatomic predisposition of the smaller female subglottis, mechanical trauma from coughing, as well as gastroesophageal reflux disease (GERD), etc.

Congenital subglottic stenosis most commonly presents as recurrent croup in infants. It can also present with biphasic stridor or respiratory distress in a newborn.

Congenital subglottic stenosis should also be suspected in children who fail extubation of tracheostomy decannulation.

On physical examination, these patients will have biphasic stridor (noisy breathing). This sound is often misinterpreted as wheezing. In fact, most patients with subglottic stenosis are first misdiagnosed as having asthma and may have received long term treatment for the same with no benefits. Patients often have shortness of breath with exertion.

Intercostal and suprasternal retractions may be present in severe cases of respiratory distress.

Prior to an endoscopic evaluation, imaging can be considered. Soft tissue airway films of neck and chest, lateral and anteroposterior views should be taken which helps in identifying foreign bodies, vascular compression, etc. The classical sign in an X-ray of subglottic stenosis is the steeple sign where subglottic tracheal narrowing produces the shape of a church steeple within the trachea itself.

Endoscopic evaluation of airways is considered to be the investigation of choice in pediatric airway problems.

Prior to rigid endoscopy, a flexible nasopharyngoscopy with the child awake needs to be done. This will help in rule out other airway problems like choanal atresia, adeno-tonsillar hypertrophy, laryngomalacia, and vocal cord paralysis, etc.

Rigid endoscopic examination is the gold standard in pediatric airway evaluation. Prior to endoscopy, dexamethasone 0.5mg/kg is given to a maximum of 20mg as a precaution. Also, the surgeon should be ready for a tracheostomy at any time. Hopkins endoscopes of various diameters can be used to assess the airway and to negotiate through stenosis if present.

Grading of airway obstruction is best carried out by utilizing endotracheal tubes (or tapered bougies), with a small tube being placed initially. If this tube leaks at less than 20cm of water pressure through subglottis, the next larger size tube is placed. The size of the endotracheal tube that can be negotiated without a leak is compared with the age-appropriate tube size and the percentage of airway constriction is calculated.

Other tracheal pathologies like vascular compression, tracheomalacia, complete tracheal rings and suprastomal collapse (in tracheostomised patients) etc need to be looked for while doing an endoscopy.

Evaluation for aspiration should be considered in children with recurrent pneumonia, insidious drop in baseline oxygen saturation and those with copious secretions stained by food material in tracheotomy.

Evaluation of the patient’s speech and swallowing by a speech pathologist is also needed prior to treatment. Fiberoptic endoscopic evaluation of swallowing (FEES) or a modified barium swallow may be considered for this. A barium swallow can also rule out posterior laryngeal cleft and tracheoesophageal fistula, etc.

Lab investigations like blood tests are needed when idiopathic subglottic stenosis is suspected, to look for autoimmune antibodies (ACE, ANCA, RF, ANA) that indicate the presence of certain autoimmune disorders such as Wegener’s granulomatosis. Histopathologic examination of idiopathic stenosis (iSGS) may show fibrosis restricted to lamina propria with normal perichondrium and cartilage.

The stenosis can be of two types, cartilaginous and membranous.

Cartilaginous type is mostly associated with congenital subglottic stenosis. Here there will be thickening or deformity of cricoid – a shelf like cartilage fills inner concave surface of cricoid cartilage.

Membranous stenosis is characterized by fibrous soft tissue thickening of the subglottic area, usually caused by increased fibrous connective tissue or hyperplastic dilated mucus glands with no inflammatory reaction. This is usually circumferential, with the narrowest area 2-3mm below true vocal cords and sometimes extends upwards to include true vocal cords. Idiopathic subglottic stenosis is of this type.

When the stenosis involves glottis or trachea McCaffrey classification is followed

Another classification system based on the nature of the stenotic segment (cartilaginous/membranous) is the Holinger histopathologic classification,

More severe cases are managed by supplemental oxygen therapy, tracheostomy as a life-saving procedure, and reconstructive repair to increase the airway diameter.

Fewer than one-half of the children with this disorder require tracheostomy. Tracheostomy is better than endotracheal intubation in congenital stenosis as intubation can further traumatize the subglottic mucosa and worsen the condition.

Reconstructive repair options for subglottic stenosis can broadly be divided into two groups.  First, laryngotracheal reconstruction (LTR) procedures in which the cricoid cartilage is split, and the framework is expanded with various combinations of cartilage grafts and stents; and second, cricotracheal resection (CTR) where a segmental excision of the stenotic segment is done, and end-to-end anastomosis is performed.

Instead of the open approach, many centers now use an endoscopic approach for anterior cartilage graft, post cricoid split and cartilage grafting, etc.

Endoscopic serial balloon dilatation is a less invasive procedure and can be considered in grade II stenosis, especially in soft subglottic stenosis as in GERD and Wegener’s.

Endoscopic procedures using laser resection, microdebrider, etc. though found to be useful in grade II stenosis should not be considered in congenital subglottic stenosis, as most often congenital subglottic stenosis is cartilaginous in nature. These endoscopic procedures can result in the exposure of cartilage leading to severe granulation tissue formation with subsequent restenosis. Open surgery is best in cartilaginous stenosis.

Grade III, IV and those with failed / not fit for endoscopic approaches may need an open external approach. These procedures may be done as a single-stage or multi-stage.

In 2019, the North American Airway Collaborative (NoAAC) network published a comparative study on the outcome of three surgical options in iSGS – endoscopic dilation, endoscopic laser resection with adjuvant medical therapy (eg, inhaled corticosteroid, a proton pump inhibitor, and trimethoprim/sulfamethoxazole), and open cricotracheal resection (CTR). The study has found that those who underwent cricotracheal resection reported the highest quality of life but the greatest perioperative risk and worst long-term voice outcomes. Endoscopic resection with medical therapy was associated with better disease control compared with ED and had minimal association with vocal function.

Treatment outcomes are generally good in experienced hands. The reported decannulation (removal of tracheostomy tube) rates are 90% in grade I & II stenosis, 80% in grade III stenosis and 50-80% in grade IV stenosis.