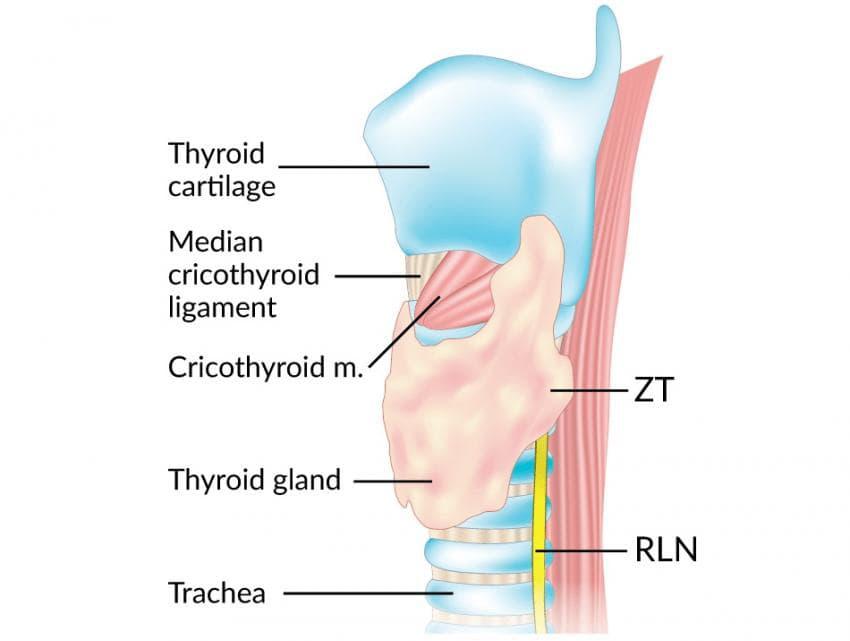 Zuckerkandl Tubercle (ZT) is the posterior projection of lateral lobes of the thyroid gland and is a common anatomical structure observed in 60-90% of cases.

The tubercle was first described by Otto Madelung in 1867 as “posterior horn of the thyroid”. Later in 1902, Emil Zuckerkandl described it as ‘tuberculum’ or ‘processus posterior glandulae thyroideae’.

The thyroid gland develops from the fusion of a median and paired lateral anlagen, arising from two distinct regions of endodermal pharynx, during the first trimester of pregnancy.

Anlagen are the areas of primordial cells which ultimately differentiate into the thyroid follicular cells. The median anlagen involve the midline thyroid tissue extending from the foramen caecum to the level of the larynx along the thyroglossal tract.  The two-lateral analgen, also known as ultimobranchial bodies, develop as caudal projections from 4th or 5th pharyngeal pouches. These lateral analgens fuses with median thyroid analgae by 6th week of development forming 10% of the thyroid gland. This point of fusion later forms the Tubercle of Zuckerkandl.

These ultimobranchial bodies produce parafollicular cells / C cells of the thyroid which produces calcitonin, a hormone essential for calcium metabolism in humans.

Zuckerkandl’s tubercle is mostly circular or triangular in shape. It is most commonly located in the middle third of thyroid lobe (in 88% cases), but can be found in the lower part or on the upper third of gland. Various studies have quoted a higher incidence of the tubercle on the right side.

Pelizzo described its anatomical importance as a landmark for recurrent laryngeal nerve during thyroid surgery and classified it into 4 grades.

A landmark for recurrent laryngeal nerve

In 6% cases, the RLN may be anterior (or lateral) to the tubercle. This is a high-risk situation, placing the nerve at increased risk of damage during dissection.

Larger tubercle can cause compression at tracheoesophageal groove leading to pressure symptoms like dysphagia.

Recognition and removal of the ZT are clearly important for the adequate performance of total thyroidectomy. If not carefully looked for and removed, the tubercle can be a source of persistent, unrelieved symptoms or recurrence after thyroid surgeries.

ZT is also the site for maximum density of C cells, making its resection mandatory in total thyroidectomy for medullary thyroid cancer.

This remnant tissue may be a source of persistent radioiodine uptake on radioactive iodine scans.

Radiologically it may be mistaken for a thyroid nodule, mass or lymph node.

Other anatomical structures associated with Zuckerkandl